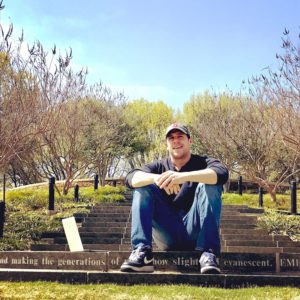 Hey! How’s it going? Still reading? Good. You could have visited any website or blog in the world and you’re visiting mine. Thank you. I’m a husband and I have two kids with my wife Steph. I am also a dad to the only Labrador Retriever on earth who refuses to play fetch. Ever. No matter what. I could throw a filet mignon from Morton’s and if it landed beyond fifteen or twenty feet he’d look at me, snort and sit down, assuming that somehow, some way, the steak would end up in his mouth. And if not, whatever. He’ll steal enough food from the kids to more than make up for it.

I grew up in Boston (mostly), but we moved around a lot when I was young, so I actually went to high school in New Jersey. My Boston and Jersey accents arm wrestled for a few years but my voice has settled into a non-distinct northeastern dialect. I went to college at James Madison University, then promptly moved to Los Angeles, where I talked my way into a job as a production assistant on The Man Show with Jimmy Kimmel and Adam Carolla. While there, I began writing for Men’s Fitness, ComedyCentral.com and many other places you can read about in my career bio, but I eventually found my way to Hermosa Beach, where I lived a block from the ocean for the last half of my twenties. It was awesome. I began playing beach volleyball year-round (became average), surfing (became one notch above awful) and started participating in open water ocean swims, my first of which was the 2-Mile Pier-to-Pier Swim from Hermosa Beach to Manhattan Beach. It took an hour. It was exhausting. I’ve done it many more times since, as well as other ocean races. My best finish was a 2nd place (for my age group) at the Nike Miami Open Water Swim in Biscayne Bay, but it was a rainy day and I think most of the competition stayed home. I got my first medal since 8th grade, so I’ll take it.

I currently live in Dallas and while I’m no BBQ connoisseur, I enjoy eating a lot of it. I read a ton of books and write about them, watch a good amount of movies,  coach T-ball, and I take a lot of pride in my garage gym because despite my love for playing hoops and swimming and football, I’m a meathead at heart.

I’m a Red Sox, Patriots, Celtics and Bruins fan from my Boston upbringing and I’m proud of it.

If you want to know why I like basketball in particular and sports in general, read this piece about me, my brother and my dad: THE NIGHT THE LEGEND OF THE DRIVEWAY WAS BORN

It explains everything and was a ‘notable mention in ‘The Best American Sports Writing‘ anthology in 2017, which is a career highlight.

I’m aware it’s not an original quote, but when it comes to my career, my dad told me a long time ago that if you can find something that you love to do, and you can figure out a way to make a living at it, you’ll be excited to go to work every day.

I love writing. I’ve been lucky enough to make a living at it. I work as hard as I can to keep doing so. I hope you all enjoy it.

A great place to get on board is my weekly Finkel’s Fast Five Newsletter. Sign up RIGHT HERE after Clubber Lang says he’s going to bust Rocky up. You’ll see.