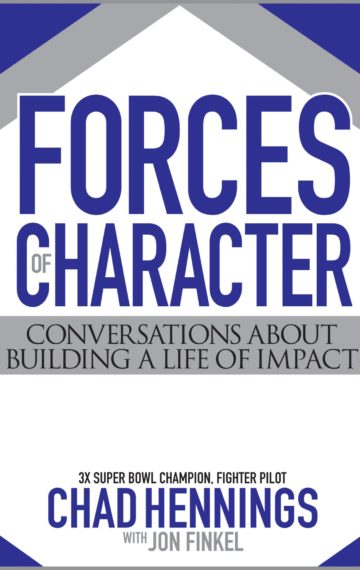 “Chad has brought together a truly astonishing collection of individuals to share their personal stories about a critical topic for our times: character. This book is just as important to society as it is to sports.”

In FORCES OF CHARACTER, three-time Super Bowl Champion, College Football Hall of Famer and Fighter Pilot Chad Hennings presents a series of conversations with extraordinary individuals who have lived a life of high moral and functional character; people who demonstrate habits of excellence consistently, who elevate their performance toward a noble purpose, and who begin lifting others to their highest potential.

Through candid interviews with an array of luminaries, Hennings explores the transformational moments, the mentors and the mindsets that have shaped the lives of his subjects, including:

Carey Casey – CEO of the National Center for Fathering

The Forces of Character in this book have made a conscious choice to try to live every day as their best possible self, to lift others to their full potential and to elevate the performance of those around them.

Whether readers learn about mental toughness and the power of a positive attitude from Edie Eger; the symbiotic relationship between character and leadership from Roger Staubach and Troy Aikman; the imperative of choosing high-integrity people for your organization from Gregg Popovich; having the courage to stand by your decisions from Tom Henricks; the importance of consciously being a mentor from Carey Casey, or any other phenomenal piece of advice from the icons in this book, whatever your takeaway is, the journey to becoming a force of character can begin with this book.