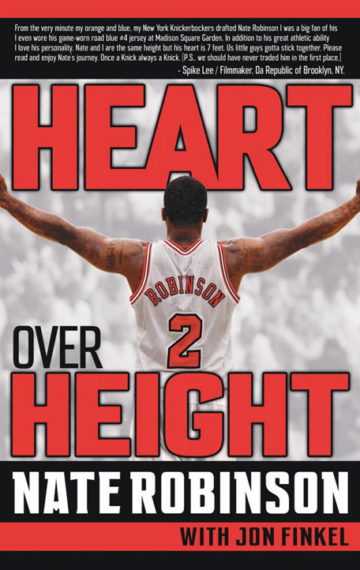 PRAISE FOR HEART OVER HEIGHT

“From the very minute my orange and blue, my New York Knickerbockers drafted Nate Robinson I was a big fan of his. I even wore his game-worn road blue #4 jersey at Madison Square Garden. In addition to his great athletic ability, I love his personality. Nate and I are the same height but his heart is 7 feet. Us little guys gotta stick together. Please read and enjoy Nate’s journey. Once a Knick always a Knick. (P.S., we should have never traded him in the first place.)”
– Spike Lee / Filmmaker, Da Republic of Brooklyn, NY.

“Watching Nate play you’re drawn to him because of his size, but also for me, because of his heart and his freakish athleticism.”
– Isiah Thomas, NBA Hall of Famer

“The way he plays gives me a little pride. You feel like it’s your brother out there or your son because you want him to do well. You know if he doesn’t, they’ll say something about his size. But you can’t say that about Nate. He’s great to watch.”
– Spud Webb, NBA Slam Dunk Champion