We’ve moved a bunch of times and occasionally when I need something in the garage I’ll find myself fishing through an old box of stuff that my parents sent me that is basically junk from my childhood that they no longer wanted to keep in their garage.

Case in point, this rap I found that I wrote somewhere between 5th and 7th grade.

It’s one of those things that I have almost no memory of writing, yet, the second I started reading it I was transported back to a time when the only thing that mattered to me and my friends in Shrewsbury, Massachusetts was watching the Red Sox, talking about the Red Sox and playing baseball pretending to be a Red Sox player….

So naturally, at some point in either 5th, 6th or 7th grade, right about the time I started getting into LL Cool J and Run DMC and all those guys, I set out to write a rap about two things:

It seems to be a mash-up of the 1986 Red Sox and maybe the ’89 and ’90s teams. In the margin I wrote Marty Barrett’s name and crossed it out. Not sure what that means. Maybe I was mad at him for something. Also, in the upper corner is written Music 4. So was this an assignment? Did I not hand it in? Is this a rough draft and there’s a better draft out there (highly doubtful)? Who knows? What I can say for sure is that it is wildly incoherent, blatantly steals from LL, yet somehow makes a decent attempt at using Rich Gedman in a verse.

I’ll spare you the effort of trying to read my awesome cursive in thick, smudged pencil, so I typed the rap out below.

I also apologize that it ends abruptly… We’ll just never know what the 11 year old me was about to say after the immortal line, “Swimming playing baseball like…” 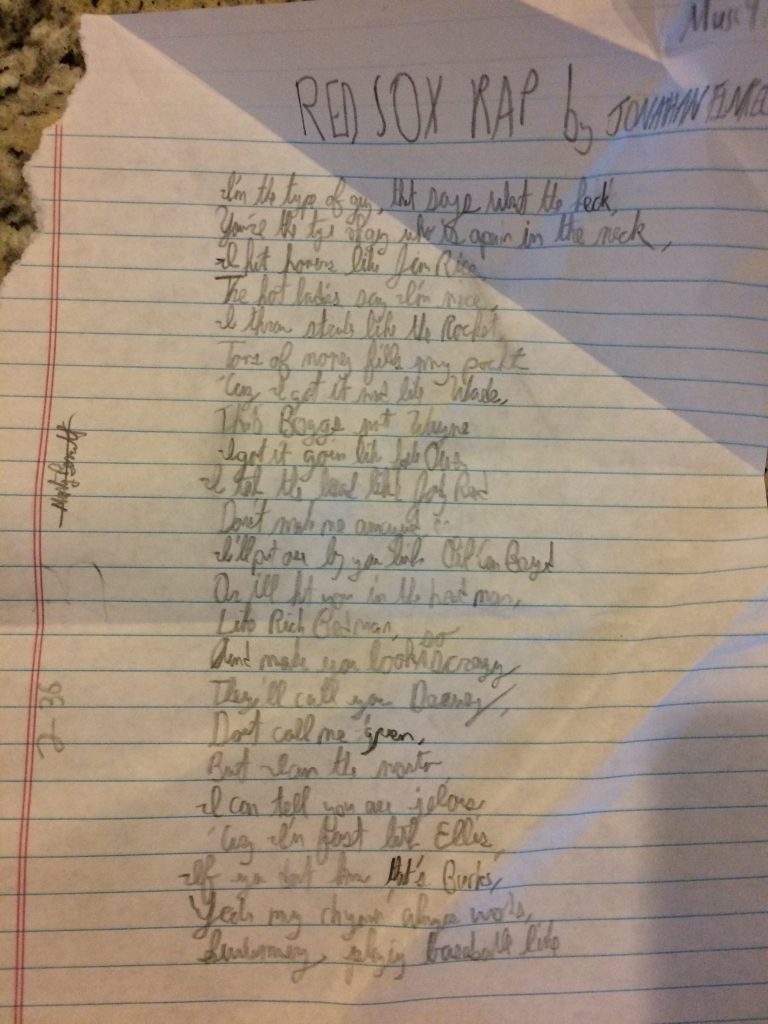 I’m the type of guy, that says what the heck,

You’re the type of guy who is a pain in the neck,

Tons of money fills my pocket,

I’ll put one by you like Oil Can Boyd,

Or I’ll hit you in the head man,

And make you look so screwy,

But I am the monster,

I can tell you are jealous,

If you don’t know that’s Burks,

And sadly, it ends there… I spit straight fire, yo!

Whether you love my rapping skills, the 80s Red Sox or most likely both, you should SIGN UP FOR MY NEWSLETTER HERE (you’ll also get a free e-book: The 29 Most Memorable Books I Read the Last Two Years)