“Jon Finkels have to stick together.”

I didn’t say that, Jon Finkel did.

For just under two decades Jon Finkel and I have been mistaken for each other on the Internet by everyone from casual Googlers of our careers to his own grandparents.

True story: For about four straight years in the early 2000s the other Jon Finkel’s grandma and grandpa would e-mail me very nice notes on both New Year’s Eve and the other Jon Finkel’s birthday. Each year I’d thank them and tell them that they had the wrong Jon Finkel’s e-mail address, but to feel free to send a check nonetheless. Eventually they figured it out. Unfortunately, the rest of the Internet didn’t.

If you’re reading this you already know that I’m a writer. What you may not know is that the other Jon Finkel, AKA, Jonny Magic, is the Michael Jordan of the strategic card game, Magic: The Gathering.

While Magic isn’t popular enough to force me to roll with the middle initial in my name like Creed’s Michael B. Jordan to erase confusion, it does have a huge online following. If you want some detailed information on Magic, you can get it here, but what’s most important to know is that the other Jon Finkel is a first-ballot Magic Hall-of-Famer, has the most Top-8 finishes in the history of the game, earned the most prize money (over $400,000) and garnered enough attention to be the subject of a book in 2006 about him called Jonny Magic and the Card Shark Kids by Rolling Stone contributing editor, David Kushner. He even has a card in the game made after his likeness, which is the main image in this story.

So, yeah, he’s kind of a big deal, not to mention he has a cooler nickname than me and is in a real life Hall of Fame. Needless to say, I’d been thinking about getting in touch with him for years for a story, and the 2016 celebration of Finkel de Mayo* seemed like as good a time as any.

I reached out to Jon Finkel through Twitter on the off chance that he’d want to help me create a bona fide Finkel de Mayo miracle…and I’m grateful he agreed to do a quick interview with me…Jon Finkel. 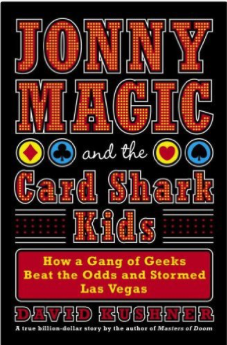 Yeah, that’s pretty much how our conversation began.

Quick aside: Never underestimate how odd it sounds to introduce yourself to yourself.

On to our conversation:

“I’ve received one or two e-mails for you,” Finkel told me. “I’d write back that they were contacting the wrong Jon Finkel. Beyond that, I was aware of your existence. You’re the other Jon Finkel who shows up on the Internet.”

Yes, yes, I am. But we had more in common than just that. Jon Finkel and I were both born in the same year and incredibly we went to high school in New Jersey about 45 minutes apart. And while I am obviously a sports fan, Jon Finkel used to be a big sports fan and still follows it enough that articles of mine occasionally makes their way to him.

“I have a mailing list of people where we talk about sports from a more analytical perspective,” Finkel said. “And someone was circulating an article recently that you wrote about Gregg Popovich and it was confusing, since people saw my name on it.”

Other things we have in common: we both play basketball.

And that’s not a bad list, considering we’re total strangers whose parents happened to like the name Jon in the late 1970s (though technically, I was named Jonathan and he was named Jon).

But the other Jon Finkel has lived an absolutely fascinating life. He was even a professional poker player for a while.

“Lots of Magic players are very good at trading and advantage gambling,” he said. “I was playing poker very seriously in my early 20s but I stopped ten years ago.”

He was also a full-time sports gambler for much of his twenties as well, which is why he says he used to be a much bigger fan.

“Nothing kills your sports fandom like betting on sports full time,” he said. “It was the form of gambling I was best at. I did grow up a fan of all the Philadelphia teams because my dad was.”

These days Jon Finkel is a partner at a hedge fund in New York City. He travels to Magic tournaments in his spare time, playing occasionally. And he’s still involved enough in the game that I receive e-mails like this one fairly often, which as you’ll see, are essentially written in a foreign language:

Out of purely selfish reasons, I ask Jon Finkel how long he thinks he’s going to play, largely to get a gauge on how long I’ll be getting his e-mails.

“I don’t know if I’ll play forever,” he said. “I go to all the major tournaments. Hopefully I’ll be involved in the hedge fund for a long time.”

I thank him for his time, wish him luck and tell him to keep making the Jon Finkels of the world proud. Then I realize I’m probably going to start getting hedge fund questions, which is the only thing I might know less about than Magic: The Gathering.

Maybe Jon B. Finkel isn’t such a bad idea after all.

Did you love this article? Get the Finkel Files sent straight to your inbox here: http://bit.ly/21juoUt

*Finkel de Mayo is a fake holiday I made up several years ago simply because my last name kind of, sort of rhymes with the ‘Cinco’ in Cinco de Mayo. The purpose of the holiday is to celebrate the other Finkels in this world, hence, this story. Thanks for reading!